St. Theresa, who was often called the Little Flower, was born in Normandy in France. She had four older sisters and her parents were Louis and Zelie Martin. Theresa was a very lively, lovable little girl and her father called her his "little queen."

Yet she could also be too sensitive and irritable. In the story she wrote of her life, she tells how the Infant Jesus helped her overcome this weakness.

Theresa wanted very much to enter the Carmelite convent where two of her sisters were already nuns. But since she was only fifteen, they did not let her.

Theresa felt sure that Jesus wanted her to spend her life loving him alone. She kept praying and asking the superior to let her join the convent. She even dared to ask Pope Leo XIII himself to grant her heart's desire and finally she was allowed to enter.

Although she was only fifteen, Theresa did not expect to be treated like a child. "Obedience, prayer and sacrifice" were her duty. She had a thirst to suffer for love of God.

Theresa had the spiritual courage of a real heroine. "May Jesus make me a martyr of the heart or of the body-or better, both!" she wrote. And she meant it.

In winter she suffered from the bitter cold and dampness of her plain bedroom. There were other kinds of sufferings, too. Whenever she was made fun of or insulted, she would offer her pain to her beloved Jesus. She would hide her hurts under a smile. She told Jesus to do with her whatever was his will.

Sister Theresa tried hard to be humble. She called her great belief in God her "little way" to holiness. She always had a burning desire to become a saint.

The young nun wanted to find a "short cut," an to take her quickly to heaven. So she looked in the Bible, and found the words, "Whoever is a little one, come to me."

When she lay dying, she could say: "I have never given the good God anything but love, and it is with love that he will repay.

After my death, I will let fall a shower of roses. I will spend my heaven doing good on earth." The Little Flower died on September 30, 1897.

"O Jesus, my love, my vocation, at last I have found it. My vocation is LOVE!" 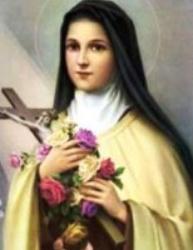