Paul is the great apostle who hated and first tortured the Christians, making them suffer much. Then on his road to Damascus Jesus changed his heart and he was converted. We celebrate Paul's conversion on January 25.

At the time of his conversion, Jesus had said: "I will show him how much he must suffer for me." St. Paul loved Jesus very much, so much, in fact, that he became a living copy of our Savior. All his life, as a missionary, St. Paul met troubles and went through dangers of every kind. He was whipped, stoned, shipwrecked, and lost at sea. Many, many times he was hungry, thirsty and cold.

Yet he always trusted in God. He never stopped preaching. "The love of Jesus presses me onward," he said. In reward, God gave him great comfort and joy in spite of every suffering.

We read about his marvelous adventures for Christ in Luke's Acts of the Apostles, beginning with chapter nine. But St. Luke's story ends when Paul arrives in Rome. He is under house arrest, waiting to be tried by Emperor Nero.

A famous early Christian writer, Tertullian, tells us that Paul was freed after his first trial. But then he was put in prison again. This time he was sentenced to death. He died around the year 67, during Nero's terrible torture of the Christians.

Paul called himself the apostle of the Gentiles (people who were not Jews) and he preached the Good News of Jesus to them. That took him to the far ends of the world. Because of Paul, we, too, have received the Christian faith.

Reflection: May our hearts be filled with joy as we honor these two great apostles: Peter, our leader in the faith, and Paul, its fearless preacher.

St. Paul Class is the top of the school so we have a  lot of responsibilities which will help us prepare for secondary school. 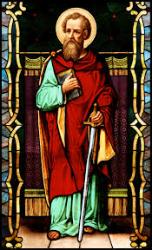