Bernadette was born in Lourdes. She was the oldest of six children but was frail and often sick.

On Thursday, February 11, 1859, around the time of her First Communion, Bernadette was sent with her younger sister and a friend to gather firewood. And this is the story she had to tell, which was taken from a letter she wrote:

"I had gone down one day with two other girls to the bank of the river Gave when suddenly I heard a kind of rustling sound. I turned my head toward the field by the side of the river, but the trees seemed quite still and the noise was evidently not from them.

Then I looked up and caught sight of the cave where I saw a lady wearing a lovely white dress with a bright belt. On top of each of her feet was a pale yellow rose, the same color as her rosary beads.

At this I rubbed my eyes, thinking I was seeing things, and I put my hands into the fold of my dress where my rosary was. I wanted to make the sign of the cross, but for the life of me I couldn't manage it, and my hand just fell down.

Then the lady made the sign of the cross herself, and at the second attempt I managed to do the same, though my hands were trembling. Then I began to say the rosary while the lady let her beads clip through her fingers, without moving her lips. When I stopped saying the Hail Mary, she immediately vanished."

The Lady also told her to have a chapel built there in her honor. Many people did not believe Bernadette when she spoke of her vision. She had to suffer very much. But one day Our Lady told Bernadette to dig in the mud. As she did, a spring of water began to flow. The next day it continued to grow larger and larger. Many miracles happened when people began to use this water.

When Bernadette was older, she became a sister. She was always very humble and did not want to be praised. She did not want to receive special treatment just because she had actually seen the Blessed Virgin.

Although her own health was poor, she helped care for the sick and elderly sisters. She died in 1879 at the age of thirty-six. Her last words were: "Holy Mary, pray for me, a poor sinner."

Reflection: Let us pray for conversion of hearts and minds so that many people will come to know and love God. 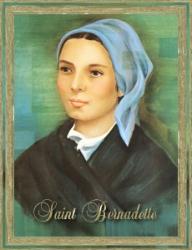