About St. Francis of Assisi 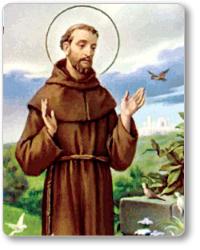 St. Francis was born around 1181 in Assisi, in Italy. As a young man he loved parties and good times. He was handsome and rich, so he bought himself the finest clothes and spent money freely.

Francis had no wish to study or to learn his father's business, as he was having too much fun. One day he refused to give alms to a poor beggar but as the man was leaving, he felt sorry for what he had done and ran after him with some money.

After he fell ill twice, Francis realized that he was wasting precious time. He realized that he should be serving Jesus and began praying more and making sacrifices to grow strong in spirit.

While riding his horse one day he saw a leper and quickly turned his horse to ride away. Then he thought to himself, if Jesus saw a leper he would not turn the other way. So he kissed the horrible-looking leper, and gave him money.

When his father took everything from him in disgust, Francis put all his trust in his Father in heaven. He said that he was married to "Lady Poverty" and he began to live as a beggar.

He had no shelter. His food was what kind people gave him. Everywhere he went, he begged people to stop sinning and return to God. Many men began to see how close to God this poor man really was, and they became his followers. Francis followed the example of Jesus closely by living a life of simplicity and teaching the Gospel message with great joy.

That is how the great Franciscan order of priests and brothers began. They helped the poor and sick and preached everywhere. Even after the order had spread all over Italy, Francis insisted that they should not own anything. He wanted his priests to love poverty as he did.

St. Francis had the power of working miracles. He loved all creatures and the birds and animals happily obeyed his commands.

As a reward for his great love, Jesus gave him his own wounds. Two in his hands, two in his feet and one in his side but the humble Francis tried to hide them from people.

Often he gave his clothes and money to the poor. He served the sick in hospitals. Still he felt he must do more. He fasted and began to go around in rags to humble himself.It is not hard to imagine how his rich friends must have looked at him now! His father was so angry that he beat him and locked him up at home. Francis bore all this suffering for love of Jesus.

Toward the end of his life, he became very sick. He was told he would live only a few more weeks and he exclaimed, "Welcome, Sister Death!" He asked to be laid on the ground and covered with an old habit.

He advised his brothers to love God, to love being poor, and to obey the Gospel. "I have done my part," he said. "May Jesus teach you to do yours." Francis died on October 3, 1226.